big apple bbq recap … among others

Friends of ours rent a house on the Cape for 2 weeks every summer.  We have a standing open invitation; however, this year we chose to go on our 10 day trip through Spain and Paris.  But as we sat on the beach of Coney Island on Sunday for a casual last-minute and inexpensive trip to the beach, I was second guessing myself for the umpteenth time as to why we didn’t join them.

One reason we didn’t join our friends on the Cape was to enjoy the summer in the city which is what we did at the Big Apple BBQ Saturday morning.  We took my own advice and got there just as the event had started and were still surprised to find the lines were already 10 mins long.  Patrons have already claimed the tables, staked out a space on the grass and ordered a ton of food.

Upon arriving, we headed directly to Jack’s Old South, the previously mentioned award-winning PitMaster that was serving brisket.  Ed Mitchell’s line was also very long so we decided to split up to conquer both lines.

Ed Mitchell was serving smoked chopped turkey and smoked chopped whole hog.  I thought the turkey was sort of bland and Jayson’s whole hog had a lot of flavor – more flavor than the brisket he purchased from Jack’s.

Upon seeing the brisket, we knew right away that this wasn’t what we had raved about last year.  While standing in line, we saw another patron eating a plate with strips of brisket rather than the pulled  brisket plate that we had purchased from Jack’s.  It turned out, we had confused Jack’s Old South with Salt Lick BBQ from Driftwood, TX.

Our next stop? Salt Lick BBQ. By this time, the line for Salt Lick’s had grown to over a 15 mins wait.  We weren’t in too much of a rush as we had already eaten a good deal of food.  This pitmaster was perfectly placed on the end of the 26th street to have enough room for the line to grow and extend as far down as it needs to.  Unfortunately for Rack & Soul (NYC based) they were located next door and everyone was passing by them to get to Salt Lick.  No one was interested in the ribs they were offering.

It was sad to see that they ended up giving them away (5 ribs at a time) in order to purge themselves of their already cooked food.  And to our pleasant surprise – the ribs were very good.  The sauce looks thick here in the picture but it really wasn’t.  I’m glad Rack & Soul is located in NYC so that we can go back for more!

Finally to the front of the line, and the verdict? Good, but not as good as

Jayson had remembered.  The fatty pieces of course were better than the lean ones but overall the brisket a little too tough and wasn’t as tender as we had remembered.  I thought the coleslaw was excellent.  It was a non-mayonnaise vinegar based coleslaw with the perfect mix of tangy flavor with a touch of sesame seed on top.  The brisket came with a smoked sausage that I thought was great.  It wasn’t too smoked and didn’t taste too greasy.  And the texture was perfect – not too chewy.  Ironically, I think Jayson enjoyed the ribs more than he enjoyed the lean pieces of brisket!

At this point we had consumed enough BBQ and moved on with our day, walking the streets and running errands.  Trying to watch my girlish figure, I abstained from eating too much BBQ and really only had a few bites of what we purchased.  With that, after a few hours I was quite hungry and ready for a summer afternoon drink.  We always enjoy going into Markt in Chelsea for drinks but never ate there (although we’ve always said the food looked delicious).  We sat at the bar, ordered drinks (a Belgian beer for Jayson and a glass of Rose for me, my new drink of choice) and I ordered the Tuna Nicoise salad.  I asked the bartender to put the dressing on the side, but he told me the dressing was already mixed in. 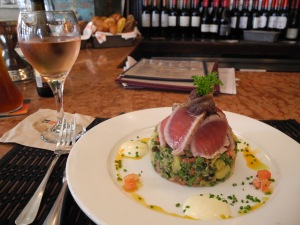 From the picture you can see why he said that.  I had never seen a Tuna Nicoise salad come in this form but I loved it! It perfectly balanced all of the ingredients to the salad.  It so hit the spot!

Needless to say our palates were overwhelmed and satisfied this past weekend.  Sadly, the southern BBQ spots have come and gone for another year. If you are so inclined, I believe you can have BBQ delivered to your doorstep from the various pitmasters.  If not, you can’t go wrong with the pitmasters from NYC.  Dinosaur Bar-B-Que and Rack & Soul in Harlem are musts as well as Wildwood BBQ and Blue Smoke.  Happy BBQ-ing!

A wanderlust at heart, I believe there is no better city to explore than NYC. With so much culture to experience, both old and new, my mission is to share my under the radar findings to enhance the experiences of the locals and the full-time NYC wanderers. I want my experiences and this blog be your go-to place for insider tips as you travel and explore this great city.
View all posts by cara protzko →
This entry was posted in Uncategorized and tagged BBQ, Dinosaur BBQ, Markt, Rack & Soul, whole hog, Wildwood BBQ. Bookmark the permalink.