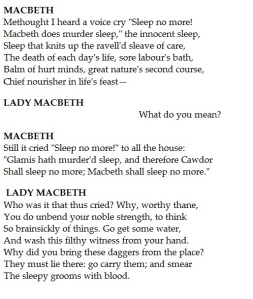 I had seen Sleep No More (ok “seen” isn’t the most accurate description), more like attended the Sleep No More show shortly after it first opened in March 2011, knowing that it wasn’t going to be in NYC too long.  I walked out of there energized and ecstatic – it was and still is the coolest, most unique show I’ve ever seen.  I haven’t thought too much about this off broadway experience until last night when my co-worker had asked me if I had “heard” of it, that she was going and was apprehensive as to what she was getting into.  Rightfully so, as there are very few photos or videos of what it’s really about.  I was SO excited for her, and reassured her that she is going to LOVE it – and she did!

Punchdrunk, an English theater company, has meticulously reformed the old McKittrick Hotel which has been an old Chelsea warehouse since the 1930’s, into the fictional 6 floor “McKittrick Hotel” in which actors rush in and out of the various rooms, throughout the hotel, beautifully (and sometimes erotically) performing scenes from Macbeth.  The masked and silenced audience is encouraged to experience the “show” with all 5 of our senses (although I did read that some things could be ingested, I wouldn’t recommend it).

It is based on the story of Shakespeare’s Macbeth mixed with the “darker psychosexual corners” of Hitchcock with references to his Vertigo and a touch of “Eyes Wide Shut”-esqness.  A little history, for you…. according to the blog Scouting NY, the original hotel “was completed in 1939 and was intended to be New York City’s finest and most decadent luxury hotel of its time. Six weeks before opening, and two days after the outbreak of World War II, the legendary hotel was condemned and left locked, permanently sealed from the public”.

All of these years later, the hotel has been restored and each room is staged to support some performed scenes of Macbeth.  The audience is encouraged to immerse themselves into the detailed theatrical rooms by opening drawers, peering into boxes and touching the furniture, all while eerie music is playing in the background.

Oh and remember – you can’t talk!

If you need another fun out of the box suggestion, don’t hesitate to contact me…..

A wanderlust at heart, I believe there is no better city to explore than NYC. With so much culture to experience, both old and new, my mission is to share my under the radar findings to enhance the experiences of the locals and the full-time NYC wanderers. I want my experiences and this blog be your go-to place for insider tips as you travel and explore this great city.
View all posts by cara protzko →
This entry was posted in art and culture and tagged Macbeth, McKittrick Hotel, off broadway, Punchdrunk, Scouting NY, Sleep No More. Bookmark the permalink.