Before moving to NYC, I lived in Boston for 8 years, most of which were in Charlestown, one of the oldest neighborhoods in Boston. I prided myself that I lived ON the hill that the Battle of Bunker Hill took place on – ok, yes,  it is also in the same hood that “Town” was filmed in.  It wasn’t until a little while ago that I learned I now live on another battleground – the Battle of Brooklyn – and interestingly enough, this battle took place shortly after we the US signed the Declaration of Independence where as the Battle of Bunker Hill took place almost a year before. 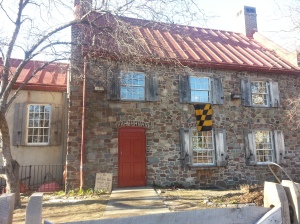 The Old Stone House, located in Park Slope and a mainstay to the Battle of Brooklyn, is a reconstructed 1699 Dutch farmhouse that is now a museum and a repository to this breadth of Brooklyn history.

It’s a cute little cottage in the middle of a park, and centralized enough among some great bars and restaurants  – and most of all – it’s free.  It’s a terrific little jaunt for everyone of all ages, a tried-and-true place to learn a bit about Brooklyn and American history.

A wanderlust at heart, I believe there is no better city to explore than NYC. With so much culture to experience, both old and new, my mission is to share my under the radar findings to enhance the experiences of the locals and the full-time NYC wanderers. I want my experiences and this blog be your go-to place for insider tips as you travel and explore this great city.
View all posts by cara protzko →
This entry was posted in art and culture and tagged Battle of Brooklyn, Battle of Bunker Hill, Declaration of Independence, Old Strone House. Bookmark the permalink.